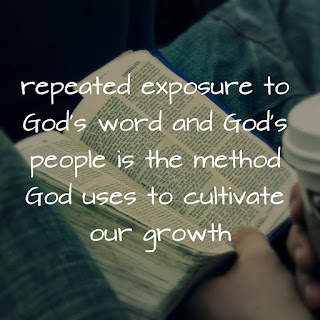 He said therefore, “What is the kingdom of God like? And to what shall I compare it? It is like a grain of mustard seed that a man took and sowed in his garden, and it grew and became a tree, and the birds of the air made nests in its branches.”

And again he said, “To what shall I compare the kingdom of God? It is like leaven that a woman took and hid in three measures of flour, until it was all leavened.” (Luke 13:18-21, ESV)

The Jews expected God's kingdom to arrive with a bang but Jesus describes it arriving in an insignificant way and growing, slowly, but powerfully. Sometimes we see the kingdom of God advancing rapdily - such as the 3000 Christians added to the church on the day of Pentecost. But, more often we see it growing under the radar, with one person telling someone else the gospel, who then tells two more. It's slower and perhaps less noticeable, but it's significant, and we often don't see that significance until much later.

Does your own growth seem insignificant?

In our own lives we see a similar thing. We are often looking for the one sermon or bible study or prayer meeting or conversation that will produce dramatic change in us. More often it's low-key, long term growth. You might not leave church buzzing about the sermon or you might not have found the home group exciting this week but repeated exposure to God's word and God's people is the method God uses to cultivate our growth. It's only with hindsight that we can see the effects of that long term project.

This should be a big encouragement to us - that Bible study, sermon, group, conversation, prayer or time invested in relationships may seem to have had little effect, but it is not wasted.
Email ThisBlogThis!Share to TwitterShare to FacebookShare to Pinterest
Labels: articles, luke
Newer Post Older Post Home