Jesus is a threat 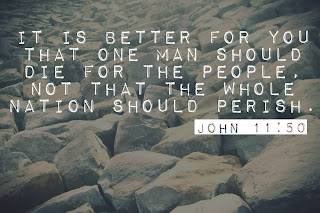 If there is a threat, you remove it

20 years ago, Nancy Kerrigan was a threat to Tonya Harding's dream of Winter Olympic gold, so she tried to take her out.
The arrival of Buzz Lightyear was a threat to Woody's position among the toys, and so he acted to try and remove that threat.
We do the same thing, it just might be less obvious as we gossip about the new starter who seems like they're better at their job than we are.

Many of the Jews therefore, who had come with Mary and had seen what he did, believed in him, but some of them went to the Pharisees and told them what Jesus had done. So the chief priests and the Pharisees gathered the council and said, “What are we to do? For this man performs many signs. If we let him go on like this, everyone will believe in him, and the Romans will come and take away both our place and our nation.” But one of them, Caiaphas, who was high priest that year, said to them, “You know nothing at all. Nor do you understand that it is better for you that one man should die for the people, not that the whole nation should perish.” He did not say this of his own accord, but being high priest that year he prophesied that Jesus would die for the nation, and not for the nation only, but also to gather into one the children of God who are scattered abroad. So from that day on they made plans to put him to death.
Jesus therefore no longer walked openly among the Jews, but went from there to the region near the wilderness, to a town called Ephraim, and there he stayed with the disciples.
Now the Passover of the Jews was at hand, and many went up from the country to Jerusalem before the Passover to purify themselves. They were looking for Jesus and saying to one another as they stood in the temple, “What do you think? That he will not come to the feast at all?” Now the chief priests and the Pharisees had given orders that if anyone knew where he was, he should let them know, so that they might arrest him. (John 11:45-57)

They don’t know what to do - they’ve tried to take him on and discredit him, trick him, insult him and nothing has worked. There's only one solution left - he’s got to be taken out.

Jesus is a threat to you

Caiaphas speaks better than he knows - they wanted one man, Jesus to die so that they could live. Actually they were already dead, and it was only through this one man’s death that they could ever find life.

Whoever loves his life loses it, and whoever hates his life in this world will keep it for eternal life. (John 12:25)