do you love your life or hate it? 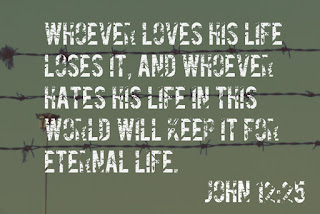 Six days before the Passover, Jesus therefore came to Bethany,where Lazarus was, whom Jesus had raised from the dead. 2 So they gave a dinner for him there. Martha served, and Lazarus was one of those reclining with him at table. 3 Mary therefore took a pound of expensive ointment made from pure nard, and anointed the feet of Jesus and wiped his feet with her hair. The house was filled with the fragrance of the perfume. 4 But Judas Iscariot, one of his disciples (he who was about to betray him), said, 5 “Why was this ointment not sold for three hundred denarii and given to the poor?” 6 He said this, not because he cared about the poor, but because he was a thief, and having charge of the moneybag he used to help himself to what was put into it. 7 Jesus said, “Leave her alone, so that she may keep it for the day of my burial.8 For the poor you always have with you, but you do not always have me.”
9 When the large crowd of the Jews learned that Jesus was there, they came, not only on account of him but also to see Lazarus, whom he had raised from the dead. 10 So the chief priests made plans to put Lazarus to death as well, 11 because on account of him many of the Jews were going away and believing in Jesus. (John 12:1-11, ESV)

Mary is the opposite of the Pharisees in the previous section who are desperately trying to hold onto what they’ve got. Here is someone not thinking twice about using perfume costing a years wages on Jesus!

Mary is mentioned specifically 3 times in the gospels and every time it has got something to do with Jesus’ feet - Luke 10:39 sitting at Jesus’ feet to listen to his teaching, John 11:32 fell at Jesus feet (dependance), and now anointing Jesus’ feet to express her devotion. She is humbly devoted to Jesus as Lord. She is not worried about status or reputation, and in humiliating fashion anoints his feet and wipes them with her hair. The Pharisees loved their “lives”, in comparison Mary “hates” hers

Should she have sold it and given it to the poor? Judas’ objection is primarily selfish, but even so, Jesus’ reply about it being kept for his burial seems to indicate that thsi wasn't a lavish perfume bought in a spending spree but something that was specifically for the purpose of annointing for burial.

Think about your time and possessions, are you like the Pharisees desperately clinging onto whatever they’ve got, or like Mary falling at Jesus feet giving him everything you have? Jesus is worthy of everything you have. He is the treasure that makes all your other treasure look like rubbish

Mary, like Caiaphas, is doing more than she realises -  she doesn’t know that in a week’s time Jesus is going to be in the tomb. We see two responses to Jesus, both ultimately focussed on his death. The Pharisees sent him to the cross because they loved their own existence and the only way to secure that was to put Jesus to death. In doing that they were signing their own death warrant. In contrast, Mary didn’t care about her own existence and, through Jesus’ death, found true life.

Whoever loves his life loses it, and whoever hates his life in this world will keep it for eternal life. (John 12:25, ESV)