the light climbed down into the darkness

The people who walked in darkness have seen a great light; those who dwelt in a land of deep darkness, on them has light shone. (Isaiah 9:2, ESV) 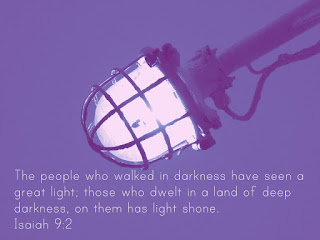 The previous 8 chapters of Isaiah repeatedly let us know why these people were “living in a land of deep darkness” - they did not trust God. This had two major effects:
This is not just a problem for the Israelites! Every time we look something else other than God for our fulfilment or satisfaction we are demonstrating a lack of trust in God. Our lack of trust in God is also demonstrated in our lack of seriousness about sin and our lack of love for others. We are living in a land of deep darkness.

The most common solution is to try to manufacture a bit of light ourselves to improve the darkness.
But we need to understand that the Bible does not talk about light as some innner force that we just have to let out of ourselves. The light is a person.

In him was life, and the life was the light of men. The light shines in the darkness, and the darkness has not overcome it.
There was a man sent from God, whose name was John. He came as a witness, to bear witness about the light, that all might believe through him. He was not the light, but came to bear witness about the light.
The true light, which gives light to everyone, was coming into the world. He was in the world, and the world was made through him, yet the world did not know him. He came to his own, and his own people did not receive him. But to all who did receive him, who believed in his name, he gave the right to become children of God, (John 1:4-12)

Again Jesus spoke to them, saying, “I am the light of the world. Whoever follows me will not walk in darkness, but will have the light of life.”(John 8:12)

Jesus IS the light. Jesus hasn’t just come to bring light - He is the light. The source of the light is not inside of us. We have better technology, education, health care, finances than ever before and none of it solves our problems. The solution is not inside of us, we need an external light source. We’re in darkness because we do not trust God and the solution to that is Jesus

The temptation is to think that the solution is to try harder. Try harder to trust God, try harder to follow Jesus. That will fail. Jesus comes to us. His presence drives out darkness - that’s what light does, darkness doesn’t exist when the light comes. We just need to be near Jesus - and that’s not us trying harder to get near him - it’s recognising and receiving him as he comes to us.

"A man fell into into a dark and slimy pit. Try as he might, it was impossible to pull himself out. One day Confusius himself came past the pit and said: 'Poor man, if only he'd listened to me, he'd never have fallen into the pit in the first place.' Some time later the Buddha came past. Looking down at the man he said: 'Poor man. Just come up here and I'll help you.' And he walked on. And then Jesus Christ walked past and he said, 'Poor man.' And He jumped into the pit and lifted him out."

The light climbed down into the darkness and drove it out.