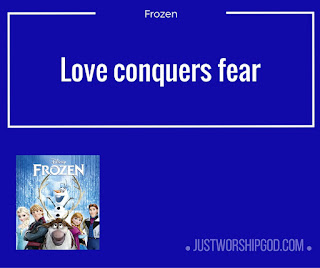 The Disney film "Frozen" is such an interesting film. Not only does it have superb music and great sing-along songs but the characters in it are fascinating. Elsa the good girl turned ice-queen, Anna the plucky but misunderstood younger sister, Hans; handsome and in love, Kristoff; abrasive and pungent and Olaf. Olaf, the character that my kids love, Olaf the inanimate snowman animated. Olaf it seems is blissfully unaware of what real life is all about but makes such insightful comments about life that one wonders if there is more going on that he lets on.
But what is the film all about? I've read some reviews that seem to think this is all about marriage verses family or freedom to be what we want to be or good becoming evil becoming good again. And while that may all be true there is one message that seems to come out loud and clear through the film: love conquers fear.

Without wishing to spoil the film there are some key moments where characters have to face fear and either fail or gloriously triumph. The issue becomes will I allow fear to dominate my life or will I allow love to win?

Christmas is all about the extraordinary love of God. He comes into our world to rescue because he loves us. Because fear has to do with judgement John, one of Jesus' friends,  says we are caught in fear. So as judgement hangs over a world in rebellion against God so love breaks through at Christmas to redeem and rescue and heal. Ultimately the baby grows up and goes to a cross in order to do that but the beginning of the rescue plan is seen in his arrival. And rather like the film frozen I am invited to move out of fear into the joyful experience of God's love in Christ. What do I do? Do I continue in fear, trembling at the thought of judgement to come or do I trust this rescue plan and see God's love in action at the first Christmas?

May this Christmas bring a fresh revelation of God's marvelous love. 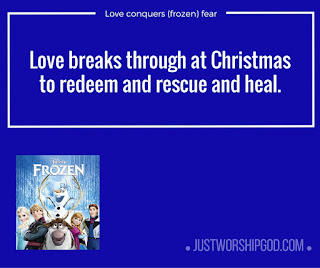