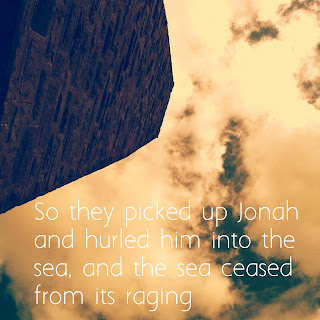 He said to them, “Pick me up and hurl me into the sea; then the sea will quiet down for you, for I know it is because of me that this great tempest has come upon you.”Nevertheless, the men rowed hard to get back to dry land, but they could not, for the sea grew more and more tempestuous against them. Therefore they called out to the LORD, “O LORD, let us not perish for this man's life, and lay not on us innocent blood, for you, O LORD, have done as it pleased you.” So they picked up Jonah and hurled him into the sea, and the sea ceased from its raging.
Joanh 1:12-15 ESV

The sailors are saved by the sacrifice of Jonah to the storm. One man's death will save them.

The sailors do not want to accept this at first, they rowed harder. The death of someone on their behalf seemed extreme so they tried again to save themselves. Only when they were absolutely desperate, totally convinced they could not beat the storm, having tried everything possible in their own strength, did they throw Jonah in.

Jesus' death in our place can often seem just as unacceptable to us. It seems extreme. we don't want it to be necessary that a life needs to be sacrificed, so we, like the sailors, go back to rowing harder. It's failed before, but maybe we can just save ourselves if we try harder this time.

We need to come to the end of ourselves and cry out to God. Recognising that our rebellion deserves death we can worship the one who was willingly sacrificed so that we could be saved!
Email ThisBlogThis!Share to TwitterShare to FacebookShare to Pinterest
Labels: articles, jonah
Newer Post Older Post Home