nothing to fear but Him 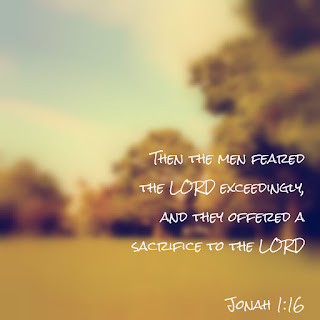 So they picked up Jonah and hurled him into the sea, and the sea ceased from its raging. Then the men feared the LORD exceedingly, and they offered a sacrifice to the LORD and made vows.(Jonah 1:15-16 ESV)


A storm so severe that professional sailors were afraid they would die, suddenly stops when they throw Jonah in. It's difficult to imagine what that would be like, but the end of the storm is so abrupt that it's clear that God is in charge.

The response of the sailors is not the absence of the fear that they had been experiencing, the fear just changes. They had feared the storm, now they fear the Lord. This is the same response that the discipleshave when Jesus calms the storm. If anything, they are more afraid after it has calmed down. Being confronted with God’s power over elements which are completely out of our control produces fear in man, due to the realisation that we’re dealing with someone on a different level.

The sailors start offering sacrifices and making vows, using God's name rather than calling out to any old God like they had been earlier.

We can be comforted that, no matter what is happening, God is bigger than the storm. We have nothing to fear but Him. And He is the one who loves us so much that he was cast into the storm in our place, he died so that death holds no fear for us.
Email ThisBlogThis!Share to TwitterShare to FacebookShare to Pinterest
Labels: articles, jonah
Newer Post Older Post Home