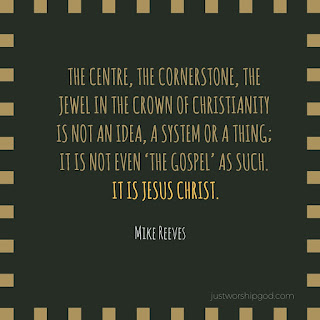 In Christ our Life, Mike Reeves points us to Jesus, over and over again, from different angles. You’ll find yourself worshiping as you read, as you are reminded of the person and work of Jesus. As one review puts it, “there is a sense in Christ our Life that the author is utterly preoccupied with, and in awe of, the Saviour of whom he writes”. You’ll be infected by that awe!

The centre, the cornerstone, the jewel in the crown of Christianity is not an idea, a system or a thing; it is not even ‘the gospel’ as such. It is Jesus Christ.

Jesus has satisfied the mind and heart of the infinite God for eternity. Our boredom is simple blindness. If the Father can be infinitely and eternally satisfied in him, then he must be overwhelmingly all-sufficient for us. In every situation, for eternity.

The One on high became low, the Creator became a creature, the Word became speechless, the very power of God became a helpless foetus. 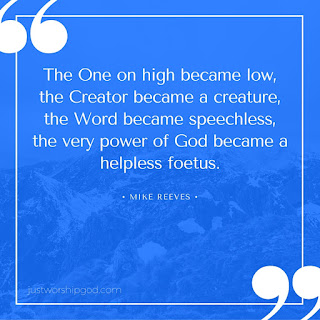 Instead of being sinners because we each sin, we were born sinners and that’s why we sin and die. ‘As the old saying goes, “From evildoers come evil deeds”’ (1 Samuel 24:13). We’re just acting out who we are.

Our plight, he saw, is not merely that we each fail to be good enough and need a little forgiveness. If it were that simple, of course we’d be tempted to try a bit harder and turn up the morality. Instead, our very identity is a problem. We were born of Adam. There is no hope for us in trying harder or getting some divine leniency. Our only hope is to be taken out of Adam’s old humanity, to be born again into a new humanity, to be a new creation.

Christians often use a negative, chilly word to describe Christ’s life: it was ‘sinless’. That tells us what he was not: he was not selfish, heartless, cruel, abusive, twisted, petty or proud. Now, when opened out like that, we can see that to be ‘sinless’ is beautiful, dynamic and attractive. The trouble is, we often leave the word closed, and then it reinforces all our stereotypes of what ‘holy people’ are like: bloodless, bland, dreamy, delicate, and so spiritual it looks painful.

I tend to assume that God must be rather like me. Bigger and better, I concede, but basically like me. Me on cosmic steroids. Then I see the cross, and it is like a defibrillator for the mind… However fantastically marvellous we may think we are, the cross is God’s verdict on us as sinners. It annihilates even the possibility of finally placing our trust in ourselves. Meaning we can know a far greater assurance, anchoring it in firm ground outside ourselves, in Christ. Christians are people who have given up all claims to both our badness and our goodness – and instead gotten him.

I am not an employee under contract, fearing being shown the door the moment I fail; clothed in Christ (despite my many, many failings) I can always cry ‘Abba!’ It takes the sting out of the accuser’s hiss when I slip; it crucifies despair; it makes me want to be with so loving a Father.

[Jesus] also transforms what we mean by that tricky word ‘holiness’. Anyone can use the word, of course, but without Christ ‘holiness’ tends to have all the charm of an ingrown toenail. For, very simply, if holiness is not first and foremost about knowing Christ, it will be about self-produced morality and religiosity.

Before anything else it matters where we look. Before anything else it matters what fills our vision. For whatever it is that occupies our attention (or, to use Jesus’ words, whatever it is that ‘remains’ in us), that will steer and shape our every thought, motive and action. You are what you see… it is not that we look, get some sense of what Christ is like, and then go away and strain to make ourselves similar; we become like him through the very looking. The very sight of him is a transforming thing. 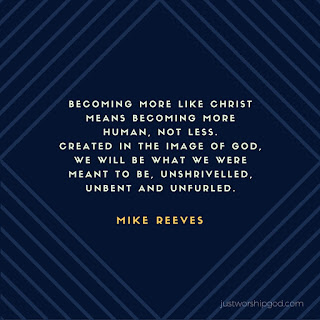 Becoming more like Christ means becoming more human, not less. Created in the image of God, we will be what we were meant to be, unshrivelled, unbent and unfurled.Tweet this