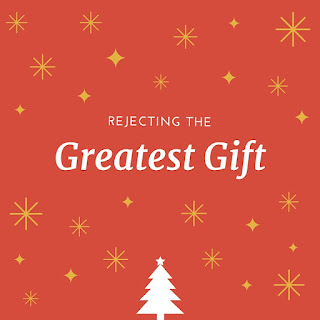 After extensive research into the thorny topic of terrible Christmas presents I discovered that there are some truly awful stories out there. Of course we will all have had our own experiences of inappropriate presents we received or presents we gave that we wished sincerely we could take back. But my favourite story was the one of the mother who bought all her children an Eye-pad. Yes of course they all thought they were receiving their dream gift only to find it was actually a piece of first aid kit rather than a technology treat. The worst of it though was the fact that her daughter had actually bought her a real IPad for Christmas. A bit of a poke in the eye if you excuse the pun.


The first Christmas surprisingly saw the greatest gift ever given rejected. Listen to how John speaks about it in his gospel account.


John 1:11 He came to his own, and his own people did not receive him.


He came to his own and his own people did not receive him is a comment about the rejection Jesus faced by the Jews. It never ceases to surprise me just how aggressively against Jesus the religious leaders and the powerful rulers of Israel were. Of course some of that is simply the power play of the day, Jesus was a threat and some people didn't want him coming in and spoiling things for them. They had a good thing going and they weren't interested in any jumped up carpenter from Nazareth spoiling things.


But it occurs to me that we can have a similar reaction to Jesus. We like him as the baby, all cuddly and cute surrounded by sheep, shepherds and wise men. But as soon as he grows up and starts talking about putting the kingdom first, loving our enemies and taking up our cross to follow him we are not so keen to receive him as the gift we imagined him to be.


Thankfully though John goes on:


John 1:12 12 Yet to all who did receive him, to those who believed in his name, he gave the right to become children of God


And there in one sentence we have the stunning trinitarian truth about Christmas: Jesus came to bring us into the family of God. Christmas is all about love and family and friendship and gifts and sharing time together and perhaps that is so because we are either trying to echo the call of God into his family or supplant it with something else. Either way what an amazing thought that the greatest gift was given and rejected which meant that the greatest relationship, the relationship with God was missed.
Imagine that: Christmas is actually about God calling us into his family rather than simply about him giving a gift that is somehow disconnected from knowing him. God's love can easily be seen as simply God doing nice things for me when actually God's love draws us into a life changing relationship with the Father the Son and the Holy Spirit.

My prayer this Christmas is that I would draw nearer to the Father who sent his Son so that I would know the joy of being a child of God in a richer and fuller way. 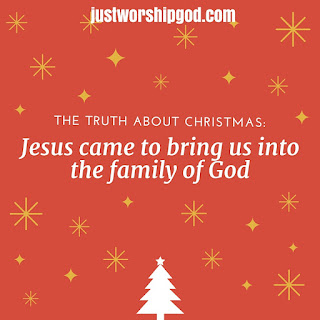