It is God's grace to send the storm 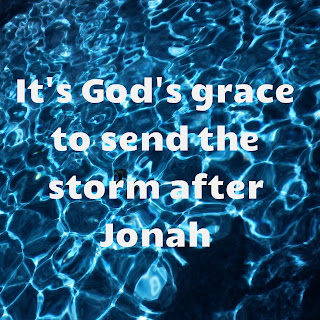 Now the word of the LORD came to Jonah the son of Amittai, saying, “Arise, go to Nineveh, that great city, and call out against it, for their evil has come up before me.” But Jonah rose to flee to Tarshish from the presence of the LORD. He went down to Joppa and found a ship going to Tarshish. So he paid the fare and went down into it, to go with them to Tarshish, away from the presence of the LORD. But the LORD hurled a great wind upon the sea, and there was a mighty tempest on the sea, so that the ship threatened to break up.(Jonah 1:1-4 ESV)


Jonah doesn't like what God has said so he tries to flee from the presence of the Lord. It would be obvious to Jonah that this is impossible, he knows Psalm 139! We also know it but still try to distance ourselves from God when we don't like what he's said. We stop attending church, stop reading the Bible, get away from anything that reminds us of God so we can pretend to ourselves that we’re not disobeying.


God could have left Jonah to his own devices and sent another prophet to Ninevah. So why does God send the storm? It’s not to punish Jonah, otherwise he would let him die when he ends up in the sea.

It is God’s grace to send the storm.

It is God’s grace to do anything that turns us back to him. No matter how much we might not like the means, anything is worth it when we are running from God because it is a life and death situation.

God doesn’t just want the message to go to Ninevah he wants Jonah to take it there. It is God’s grace to confront Jonah with a task that he doesn’t want to do with an outcome he’s not going to like in order to show him how amazing His grace is. This misson is as much for Jonah to see how gracious God is as it is for the Ninevites.
Email ThisBlogThis!Share to TwitterShare to FacebookShare to Pinterest
Labels: articles, jonah
Newer Post Older Post Home