you have not outrun His grace 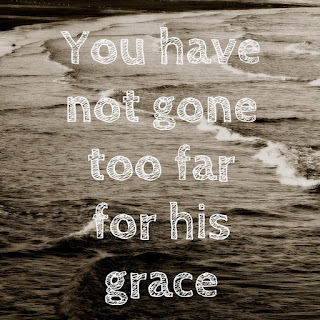 But the LORD hurled a great wind upon the sea, and there was a mighty tempest on the sea, so that the ship threatened to break up. Then the mariners were afraid, and each cried out to his god. And they hurled the cargo that was in the ship into the sea to lighten it for them. But Jonah had gone down into the inner part of the ship and had lain down and was fast asleep. So the captain came and said to him, “What do you mean, you sleeper? Arise, call out to your god! Perhaps the god will give a thought to us, that we may not perish.”(Jonah 1:4-6 ESV)

If the professionals are frightened, then you know it's serious. The storm that God had graciously hurled at Jonah was still terrifying.

The sailors start desperately crying out to every 'god' under they've ever heard of. All their efforts have failed, they're now clutching at straws. In a similar situation in Acts 27, Paul encourages the sailors to have faith in God. Here, Jonah is asleep.

The prophet sleeps while the pagans screamAlistair Begg


The captain has to ask Jonah to pray to his God for help as there is no sign of him offering to pray (and we're not told that he did, even after being asked). The God who sent the storm is the God who can do something about it but that is the God who Jonah is running from.

The sailors, and Jonah, will survive and again, that's entirely down to God's grace and nothing to do with Jonah. How often are we like Jonah - running from God? Sleeping while people desperately need the good news of the gospel? However, we can be encouraged, no matter how far we have run, we have not outpaced his grace.
Email ThisBlogThis!Share to TwitterShare to FacebookShare to Pinterest
Labels: articles, jonah
Newer Post Older Post Home