The consequences of sin 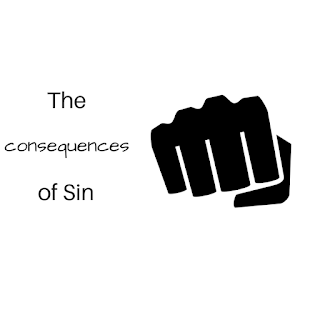 In part 1 we saw how sin is not just the breaking of an arbitrary rule, it is the betrayal of a relationship with God as we doubt his word, disbelieve his goodness and desire his position. As we read on in Genesis 3, we see the consequences of sin.

Genesis 3:2-24
Then the eyes of both were opened, and they knew that they were naked. And they sewed fig leaves together and made themselves loincloths.

8 And they heard the sound of the Lord God walking in the garden in the cool3 of the day, and the man and his wife hid themselves from the presence of the Lord God among the trees of the garden. 9 But the Lord God called to the man and said to him, “Where are you?”4 10 And he said, “I heard the sound of you in the garden, and I was afraid, because I was naked, and I hid myself.” 11 He said, “Who told you that you were naked? Have you eaten of the tree of which I commanded you not to eat?” 12 The man said, d“The woman whom you gave to be with me, she gave me fruit of the tree, and I ate.” 13 Then the Lord God said to the woman, “What is this that you have done?” The woman said, e“The serpent deceived me, and I ate.”

14 The Lord God said to the serpent, “Because you have done this, cursed are you above all livestock and above all beasts of the field; on your belly you shall go, and dust you shall eat all the days of your life. 15     I will put enmity between you and the woman, and between your offspring and her offspring;he shall bruise your head, and you shall bruise his heel.” 16 To the woman he said, “I will surely multiply your pain in childbearing; in pain you shall bring forth children. Your desire shall be contrary to6 your husband, but he shall rule over you.” 17 And to Adam he said, “Because you have listened to the voice of your wife and have eaten of the tree lof which I commanded you, ‘You shall not eat of it,’ cursed is the ground because of you; in pain you shall eat of it all the days of your life; 18     thorns and thistles it shall bring forth for you;
and you shall eat the plants of the field. 19     By the sweat of your face you shall eat bread, till you return to the ground, for out of it you were taken;for you are dust, and to dust you shall return.”

20 The man called his wife's name Eve, because she was the mother of all living.7 21 And the Lord God made for Adam and for his wife garments of skins and clothed them.

22 Then the Lord God said, q“Behold, the man has become like one of us in knowing good and evil. Now, lest he reach out his hand rand take also of the tree of life and eat, and live forever—” 23 therefore the Lord God sent him out from the garden of Eden to work the ground from which he was taken. 24 He drove out the man, and at the east of the garden of Eden he placed the cherubim and a flaming sword that turned every way to guard the way to the tree of life.  (ESV)

As they eat the fruit, their eyes opened - they have gained the knowledge that the tree was named after. They realised they were naked and covered themselves - they had always been naked and unashamed (gen2:25) - now they feel shame and want to cover themselves

They hide from God. This is not just about breaking an arbitrary rule - they know that, in eating the fruit, they have called God's character into question. They have doubted what he said, disbelieved his love and tried to take his place. When you do that to the creator of the universe, you hide!

As a result of sin, conflict is now a part of life.

God said they would die, Satan said they wouldn’t - who was right?
They didn’t die then and there, but because of this, death entered into the world (v19 - you are dust and to dust you will return)

Why were they banished from the garden of Eden? Because of the possibility of them eating from the tree of life (which presumably they had been  previously allowed to do) and living in a sinful state forever. 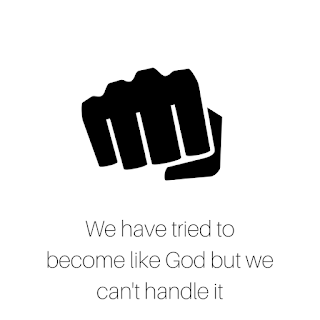 Everyday
We experience these same consequences every day!

Brene Brown - “shame is an epidemic in our culture” “Shame drives two big [thoughts]— "never good enough" — and, "who do you think you are?"  “[it is a] web of unobtainable, conflicting, competing expectations about who we’re supposed to be”

We have tried to become like God but we can’t handle it-  God isn’t plagued with shame because he is good enough, but now we are aware of the countless ways we fail (not just against God’s standards but against our own!) We can’t shake that shame that says you’re not good enough.

Who hasn’t experienced conflict in a relationship?! Sin is essentially selfish (Luther - sin is being curved in on yourself). Our relationship conflict starts with the fact that we have tried to put ourselves in God’s position, meaning we then start have to think about how to look after ourselves, which means we put ourselves ahead of others needs, and when everyone is doing that, you get conflict

And, of course, we all have death hanging over us. You're a little bit closer to it than you were when you started reading this article!

So far, very bleak! But even as sin enters the world, God has good news, and we'll look at that in part 3