The nature of sin 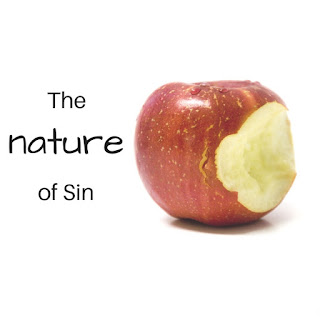 Sin is not about an arbitrary list of things to do or not do - it is betrayal in a relationship.


A huge misconception about ‘sin’ is that it is a list of dos and don’ts. At first glance, the story of the first sin could feed into that - they ate a random apple that God told them not to - pointless command, petty God, what's the big deal?


As we look closely at the story , we actually see that this is about the relationship between Adam and Eve and God, and that is what our sin is about too. It’s not about how many drinks you had last night or how many unkind words you’ve said this week, it’s about your attitude towards God.

Genesis 3:1-6
[1] Now the serpent was more crafty than any other beast of the field that the LORD God had made.
He said to the woman, “Did God actually say, ‘You shall not eat of any tree in the garden’?” [2] And the woman said to the serpent, “We may eat of the fruit of the trees in the garden, [3] but God said, ‘You shall not eat of the fruit of the tree that is in the midst of the garden, neither shall you touch it, lest you die.’” [4] But the serpent said to the woman, “You will not surely die. [5] For God knows that when you eat of it your eyes will be opened, and you will be like God, knowing good and evil.” [6] So when the woman saw that the tree was good for food, and that it was a delight to the eyes, and that the tree was to be desired to make one wise, she took of its fruit and ate, and she also gave some to her husband who was with her, and he ate. (ESV)

In chapter 1 we see God’s word speaking creation into existence. God’s word created everything, now the first sin happens because it comes under attack. When God’s word is questioned in this way, it is really questioning the goodness of his word.

God had given them this rule because he loved them and because he is committed to their good - they start to doubt that.

What does it say about us that that seems like a harsh rule? They are living in paradise, they can eat from ANY tree except one, and straight away we focus on the one thing that they were not allowed. That tells us that we’ve got someone whispering the same lies in our ear!

God’s position desired
The temptation here is to be like God, to stage a coup, to usurp his rightful position. They were in charge of the world, but they were tempted by going one step higher

The devil wants us to try and be our own gods - this sounds natural and even right to our western, individualised ears - that’s because we’ve been hearing the same lies all our lives - that god wants to oppress you, you can be in charge yourself, you’re the best person for the job 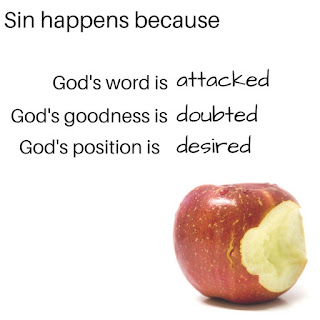 The person clicking through video after video on pornographic websites does not believe that God’s plan for sex to be fulfilled within marriage is more fulfilling, satisfying and enjoyable than what they are looking at.

The person joining in with gossip about somebody to fit in with the group at work is questioning that their relationship with God is the place where they find all the acceptance that they need and is believing that what they need is to feel accepted by this group right now.

The person telling a lie to manipulate a situation is trying to take God’s position and be in charge of truth. We think we know better than a God who would say it’s not just right, but best, to be honest in all situations.

The person about to punch their brother in the face because he has just moved one of their Pokemon models is doubting their parent’s reliability to sort the situation out. We don’t trust God to sort out situations in our best interest so we try to take matters in our own hands

The ‘sins’ that we commit are because we are sinners doubting god’s goodness and wanting to take his place.


“What Satan put into the heads of our remote ancestors was the idea that they could ‘be like gods’—could set up on their own as if they had created themselves—be their own masters—invent some sort of happiness for themselves outside God, apart from God. And out of that hopeless attempt has come nearly all that we call human history—money, poverty, ambition, war, prostitution, classes, empires, slavery—the long terrible story of man trying to find something other than God which will make him happy.
God cannot give us a happiness and peace apart from Himself, because it is not there. There is no such thing.” —from Mere Christianity

The nature of sin is that is a broken relationship - that we have broken. Christianity doesn’t say there are good people and sinners, it says everyone is a sinner. We are all sinners. There is only one good person in the Bible, and his name is Jesus