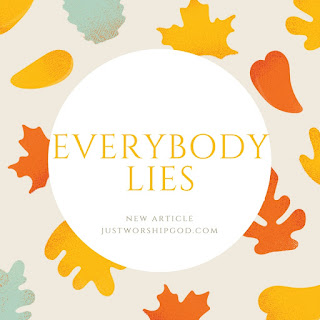 In an article extracted from his book analysing Google search data, Seth Stephens-Davidowitz starts like this:


That includes me and you. Straight away we will jump to our own defense - we don’t lie very often, or as often as other people we know. Or we get distracted by extreme examples - is it OK to lie to a Nazi soldier when you’ve got Jews hiding in your basement? When it comes to everyday, undramatic life, we recognise our tendency to be slippery with the truth, or to change it when we feel it is necessary. Why do we do that? The article continues:


“Many people underreport embarrassing behaviours and thoughts on surveys. They want to look good, even though most surveys are anonymous. This is called social desirability bias. An important paper in 1950 provided powerful evidence of how surveys can fall victim to such bias. Researchers collected data, from official sources, on the residents of Denver: what percentage of them voted, gave to charity, and owned a library card. They then surveyed the residents to see if the percentages would match. The results were, at the time, shocking. What the residents reported to the surveys was very different from the data the researchers had gathered. Even though nobody gave their names, people, in large numbers, exaggerated their voter registration status, voting behaviour, and charitable giving.”


Fundamentally we lie because of this social desirability bias. We lie to manipulate and control what other people think about us. We want to create a better version of ourselves. We are worried about people knowing what we are really like, and so we try to manage the truth to prevent that happening.


What does God say about lying? He tells us not to do it in the 10 commandments. He is pretty clear that He hates it (eg Proverbs 12:22). The devil is described as the father of lies (John 8:44). Sin enters the world through a lie about God and, as soon as sin exists, Adam and Eve start manipulating the truth.
But while that is helpful in diagnosing the problem, how do we stop doing it?


We can see truth levels in our lives increase as we look to THE truth - Jesus. We lie to hide the parts of ourselves we don’t think are fit for public consumption - he knows all those parts of us, even the parts we lie to ourselves about. We lie to make people believe something about us - he knows us inside out. In a way, our worst fears have become reality, somebody has seen us completely unfiltered. But, in full knowledge of that, Jesus loves us. He loves us so much that he died in our place, for our lies.


He then rose from the dead to free us from sin. We are no longer enslaved to the web of lies we’ve created. The reputation that we’ve worked so hard to manage has been busted, but all the those things we were ashamed of have been dealt with.


Do not lie to one another, seeing that you have put off the old self with its practices and have put on the new self, which is being renewed in knowledge after the image of its creator.
Colossians 3:9-10


Rather than telling ourselves we should not lie, we can tell ourselves that we don’t need to lie. We can be secure in Jesus’ love as we are being transformed into his image.


Rather than being overcome with shame when we do lie, we can run to the forgiveness that Jesus has obtained for us, repenting our failure but rejoicing that we are heading for a future that looks very different:


They shall seek refuge in the name of the Lord, those who are left in Israel;
they shall do no injustice and speak no lies, nor shall there be found in their mouth a deceitful tongue.
For they shall graze and lie down,  and none shall make them afraid
Zephaniah 3:12-13